Toronto, December 16th, 2013 – Following the release of the 2013 PMB[1] Fall report, CAA Magazine has shown more impressive growth with a 10% increase in readership since Fall 2012, making it Canada's 7th most-read magazine publication. The magazine, created and published quarterly by Totem in partnership with four Canadian Automobile Association clubs, has gained 236,000 readers, raising its total readership to 2,647,000 Canadians (12+). Building on the momentum of the Fall 2013 magazine redesign and the strength of these PMB results, CAA Magazine is proud to announce a 15% increase in book size to 56 pages, starting with the Spring 2014 issue. 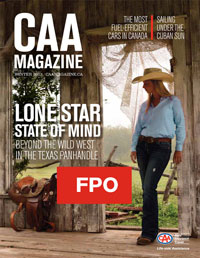 "The consistent growth in CAA Magazine readership shows that the book is finding a home in the lives of Canadians," says Paul Ferriss, Editor at Totem, TC Media. "We continue to engage our readers with compelling stories and striking design."

Not only has CAA Magazine increased readership, but readers are spending 7% more time reading an issue and are more highly engaged with its content. 13% more readers rated the magazine 8-10/10 and there has been a 5% gain in occasions read since Fall 2012. "We are really pleased with the latest PMB results of CAA Magazine," explains Rhonda English, Vice President, Corporate Marketing & Member Value, CAA South Central Ontario. "Exceeding our Members' expectations is key to our success and seeing these improvements reinforces the relevancy of CAA in the lives of our Members."

The findings of the latest PMB survey also show that CAA Magazine's readership stands out with an average household income of $87,646. With 1 in 4 readers being a professional, manager or business owner, the magazine's audience remains more affluent than the rest of the Canadian population. The results also reveal that 1.3 million CAA Magazine readers have taken an international trip in the past year. In addition, 1.6 million have taken a vacation trip in Canada in the past year, and, of these readers, 1 in 3 has taken 3 trips or more.

The Texas Thrills Contest
To reward its loyal readers, CAA Magazine is pleased to present the Texas Thrills Contest featuring a six-night trip to the Lone Star State for two people. From November 12 through December 31, 2013, all legal residents of the provinces of Ontario, New Brunswick, Nova Scotia, Prince Edward Island and Newfoundland can enter the Texas Thrills Contest online at www.caamagazine.ca/texas-contest.html. The grand prize is a six-night trip to Texas for two people worth $7,500 and includes a Texas Rangers baseball game, a Texas Motor Speedway NASCAR four-lap passenger ride, amazing sightseeing, attractions and activities and much more. All details are available online.

About CAA
CAA is the most trusted name in Roadside Assistance. With more than 5.5 million CAA Members across Canada, CAA offers a number of additional products and services ranging from auto, home and travel insurance to savings at hundreds of shops and attractions across North America.  CAA also keeps communities safer through programs like CAA School Safety Patrol and Worst Roads.

About TC Media
Totem is a division of TC Media, one of Canada's leading providers of media and marketing activation solutions. Employing over 3,500 people, TC Media reaches 24 million consumers in Canada through its integrated multiplatform offering that includes print and digital media, the production of magazines, newspapers, books and custom content, mass and personalized marketing, interactive and mobile applications and door-to-door distribution.

TC Media is a brand of Transcontinental Inc. (TSX: TCL.A, TCL.B, TCL.PR.D), which has over 9,000 employees in Canada and the United States, and reported revenues of C$2.1 billion in 2013. Website www.tc.tc.