From Our House to Yours, Canadian Living Unveils Plans for a Yearlong Party 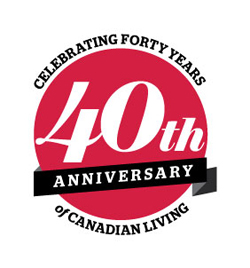 Toronto, December 2, 2014 – Canadian Living, one of Canada's most iconic and beloved magazine brands, is celebrating its 40th anniversary in 2015. The fun begins with the January 2015 issue. It starts today on canadianliving.com/CL40 and continues for a full year. Monthly guest editors, an anniversary cookbook, VIP events and exclusive reader contests are just a few of the surprises in store. Look for the new 40th anniversary logo featured prominently on all Canadian Living channels.

Twelve accomplished individuals were chosen to help edit the anniversary issues; taking the lead in the January issue is Olympic hockey hero, Canada's Walk of Fame inductee and busy mom Hayley Wickenheiser. Hayley is passionate about keeping kids active. She shares her personal story in the magazine and will also be part of an exclusive Canadian Living live Twitter chat on December 17 from noon to 1 p.m. EST. Guest editors will be revealed throughout the year and announced first on Canadian Living's social media platforms.

"Canadian Living's evolution from a quarterly publication to a truly multiplatform brand is remarkable. I am thrilled to be joining the team at such a pivotal time in the brand's history," says newly hired multiplatform editorial director Sandra E. Martin. "With an estimated 13.6 million brand impressions per month*, Canadian Living has always been a tremendous resource for women across Canada, and I plan to continue the tradition of delivering truly accessible food, health, fashion, beauty, entertainment, travel and home decor content to our readers, friends and followers."

Throughout the anniversary year, Canadian Living editors will be looking back at memorable moments in the magazine's history, and looking forward, offering readers new and exciting ways to engage with the brand. 40th anniversary plans include:

"Canadian Living is the bestselling Canadian women's service magazine on newsstandsϮ because we are the brand Canadian women rely on," says Jacqueline Loch, vice-president and group publisher, Consumer Solutions Toronto and Vancouver, TC Media. "Throughout this milestone year, not only are we focused on creating great content but we are also offering our advertisers unique ways to engage with our millions of readers. Look for special cover executions, sponsored sections and contest partnerships, as well as plenty of events, sampling and promotional opportunities that will further enhance the anniversary celebrations."

Canadian Living is an award-winning brand that has become essential to Canadians over its 40 years, thanks to many brand channels, including the 42 special interest publications, six bookazines and 64 cookbooks carefully curated over the past 40 years. With interactive iPad and other digital editions, e-newsletters, a website, a mobile site, a mobile app, an On the Table app, daily social media posts and thousands of mouthwatering Tested-Till-Perfect recipes, Canadian Living is a lifestyle brand that caters to all Canadian women.

TC Media is a division of Transcontinental Inc. (TSX: TCL.A TCL.B), which has over 9,000 employees in Canada and the United States, and revenues of C$2.1 billion in 2013. Website: tc.tc.

For further information or to arrange an interview, please contact: