Montreal, March 9, 2016 – TC Media is very proud to mark Métro newspaper's 15th anniversary this year by publishing a special issue, available today, with highlights from the newspaper's history and from its major news coverage. For the occasion, the editorial team has selected top headlines from the past 15 years and conducted interviews with people who made the news in 2001. 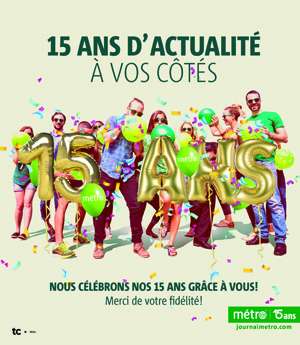 "In 2001, there was great excitement about the launch of Métro newspaper, the result of a partnership between TC Transcontinental, Metro International and Gesca, to introduce a free daily newspaper in Montreal. Then, in 2012, TC Transcontinental became the newspaper's sole owner," said Nicolas Faucher, Métro publisher. "Métro newspaper has evolved a great deal since its launch and is now a dynamic multiplatform brand that is part of the daily routine of 1.2 million people every week, making it the most widely read daily on the Island of Montreal from Monday to Friday. With 15 years of growth, innovation and news to its credit, Métronewspaper has a bright future ahead."

Bolstered by its ties to Metro International, Métro newspaper continues to innovate and offer exclusive international content while drawing on a creative and passionate local editorial team that is continually reinventing itself. Over the coming year, Métro newspaper's 15th anniversary will be marked by a number of different initiatives, including special columns published on all our platforms as well as a contest for our readers.

About the Métro Montreal newspaper

Métro Montreal, the most widely read daily paper on the Island of Montreal, reaches 310,000 readers daily, Monday to Friday. With its team of local reporters and its partnership with a worldwide network of over 400 journalists, Métroexcels at providing quality content, covering national and international news, as well as local and hyperlocal information. Proud partner of the Société de transport de Montréal, Métro is distributed free to metro users and through its own distribution network as well.

In 2016, Métro Montreal marks its 15th anniversary. Wholly owned by Transcontinental Inc. through its division TC Media, Métro daily newspaper is one of the local editions of Metro International.

TC Media is a division of Transcontinental Inc. (TSX: TCL.A TCL.B), which has over 8,000 employees in Canada and the United States, and revenues of C$2 billion in 2015.