Montreal, July 5, 2016 – TC Media is proud to announce that it is one of the first Canadian publishers to launch Accelerated Mobile Pages (AMP) websites for its daily newspapers and some weeklies in Atlantic Canada. TC Media's flagship titles such as The Guardian, The Telegram and The Truro Daily News are now using this technology, allowing web pages to load an average of four times faster on mobile devices [1]. TC Media has teamed up with Google Canada and other leading Canadian publishers to make the mobile web quicker thanks to AMP. 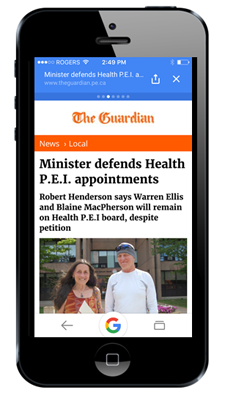 AMP are web pages designed using an open-source code, providing optimal delivery speed and using an average of 10 times less data than equivalent non-AMP pages [2]. Articles published with a valid AMP format are also featured more prominently in Google's search results and on Google News Canada, in a carousel. AMP content created by TC Media and other publishers is highlighted with a lightning bolt symbol.

Thane Burnett, TC Media's Content Director for Atlantic Canada, said: "We all love shaving seconds off the clock. The same is true for getting your news on your mobile devices. TC Media has decided to lead the way with Google Canada and other Canadian news leaders to enhance the reading experience on mobile and publish digital content in a more compelling way. AMP is a really cool example of how we're putting local news in the palm of our readers' hands in the blink of an eye. It's a welcome improvement for those who love the news and want it now."

TC Media is a division of Transcontinental Inc. (TSX: TCL.A TCL.B), which has close to 8,000 employees in Canada and the United States, and reported revenues of C$2 billion in 2015.