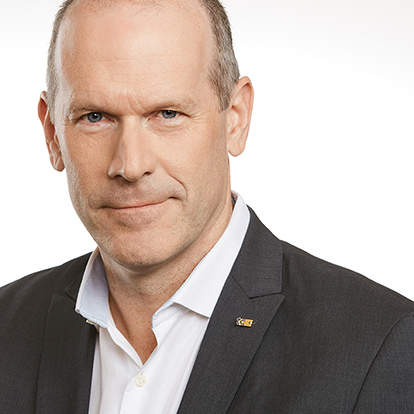 Donald LeCavalier holds the position of Chief Financial Officer of TC Transcontinental. In this role, his mandate is to oversee the entire Finance Department, namely financial disclosure and analysis, taxation, internal audit, treasury and transactional services. Mr. LeCavalier is also responsible for investor relations and government affairs in addition to overseeing the Corporate Communications Department. He is also responsible for the media sector, TC Media, which includes TC Media Books and Groupe Constructo.

In 2006, Donald LeCavalier joined TC Transcontinental as Treasurer. Over the years, he rose through the ranks leading up to his appointment as Senior Vice President, Finance and Corporate Affairs, a position he held until September 2018 before being entrusted with the financial leadership of the Corporation. In terms of his achievements, his solid track record provided him with the expertise required to effectively lead the refinancing of the Corporation, raising nearly a billion dollars during the 2008-2009 global financial crisis. His leadership also enabled him to lead a major project involving the complete review of TC Transcontinental’s administrative functions in order to simplify processes and optimize costs. Another of his successes has been the overhaul of the Corporation's pension plan. Over the last few years, he has played a significant role in TC Transcontinental’s flexible packaging growth strategy and in completing numerous transactions that have shaped its transformation. In the spring of 2018, he orchestrated the financing for the US$1.3 billion transformational acquisition of Coveris Americas, the largest acquisition in the company’s history.

Prior to joining TC Transcontinental, Donald LeCavalier held various treasury positions at SNC-Lavalin and Donohue, and later served as Treasurer at Transat AT from 1999 to 2006. A Chartered Accountant (CPA), he is a graduate of the Université du Québec à Montréal. As part of his commitment to education and to working with the next generation, he occasionally shares his professional experience by way of various presentations to MBA students at Concordia University, or with HEC Montréal students pursuing their CPA designation.