Transcontinental Inc. increases its revenues by 8% in the third quarter and pursues the integration of Quad/Graphics Canada, Inc.

Montreal, September 6, 2012 – Transcontinental's Inc. (TSX: TCL.A TCL.B TCL.PR.D) revenues grew 8% in the third quarter, from $479.4 million to $517.0 million. This growth was driven primarily by the acquisition of  Quad/Graphics Canada, Inc. and Redux Media, among others, the volume generated from new printing contracts and the launches of new community newspapers in Quebec. It was, however, mitigated by the expected reduction in sales in the Educational Book Publishing Group, due mainly to the end of the school reform in Quebec, the incentives granted at the renewal of certain printing contracts and the decrease in national advertising in community newspapers outside Quebec. Excluding acquisitions, divestitures and closures, the impact of the exchange rate and the paper component variance, organic revenue growth was negative by 3% in the third quarter. The decrease originates in the Media Sector, while the Printing Sector recorded organic growth of 1%.

"The third quarter results demonstrate the resilience of our printing operations and the adverse impact of difficult market conditions on some niches in the Media Sector," said François Olivier, President and Chief Executive Officer. "In the Printing Sector, the integration of Quad/Graphics Canada, Inc. progressed and we are on track to generate the anticipated synergies of more than $40 million over the next 18 months. In fact, starting in the fourth quarter, we will reap the benefits of this acquisition more significantly. We sold our remaining one- and two-colour book printing assets and renewed several contracts with national retailers. We also recently extended contracts to print Rogers' marketing products and magazines.

François Olivier noted also that "although the Media Sector has been affected by the exceptional events that have lowered the results of the Educational Book Publishing Group, we continued to invest in the development of new products and services. The scope of our digital network was expanded through the acquisition of Redux Media and the partnership with Glacier‍ Media. We enriched the content of our platforms by acquiring all outstanding shares of the newspaper Métro Montréal and launching several mobile apps. In addition, the organization continues to generate significant cash flows and has a solid financial position. Over the next 12 to 18 months, our priorities will be to complete the integration of Quad/Graphics‍ Canada, Inc., to further invest in our multiplatform offering and to improve the Media Sector's performance."

For more detailed financial information, please see Management's Discussion and Analysis for the third quarter ended July 31, 2012 as well as the financial statements in the "Investors" section of our website at www.tc.tc

Highlights of the First Nine Months

For the first nine months of fiscal 2012, the revenues of Transcontinental Inc. grew 4%, from $1,467.7 million to $1,527.0 million. This increase is mainly due to the acquisition of Quad/Graphics Canada, Inc. and Redux Media, among others, to new contracts, notably with Canadian Tire, and to community-newspaper acquisitions in Quebec. It was mitigated by the lower volume from the non-recurring revenue from the printing contract for the Canadian Census last year, by the erosion of demand in the Educational Book Publishing Group due to the end of the school reform in Quebec, by the soft national advertising market which affected community newspapers outside Quebec and by the incentives granted at the renewal of certain printing contracts.

Adjusted operating income was down 11%, from $166.6 million to $148.8 million, primarily due to the above-noted reasons, and to margin erosion stemming from competitive pressures in the local solutions market. Net income applicable to participating shares decreased, from $89.9 million, or $1.11 per share, to a loss of $131.4 million, or $1.62 per share. This decrease is mainly due to an impairment of assets of $180.8 million, which is non-cash and non-operational. The notices of re-assessment received from the federal and provincial tax authorities last February, totalling $58 million, which the Corporation is currently contesting, and the restructuring, integration and acquisition costs to integrate Quad/Graphics‍ Canada, Inc. also contributed to the decrease. Excluding unusual items and discontinued operations, adjusted net income applicable to participating shares was down 13%, from $100.8 million, or $1.24 per share, to $87.5 million, or $1.08 per share.

Financial data have been prepared in conformity with IFRS. However, certain measures used in this press release do not have any standardized meaning under IFRS and could be calculated differently by other companies. We believe that many readers analyze our results based on certain non-IFRS financial measures because such measures are more appropriate for evaluating the Corporation's operating performance. Internally, Management uses such non-IFRS financial information as an indicator of business performance, and evaluates management's effectiveness with specific reference to these indicators. These measures should be considered in addition to, not as a substitute for or superior to, measures of financial performance prepared in accordance with IFRS. 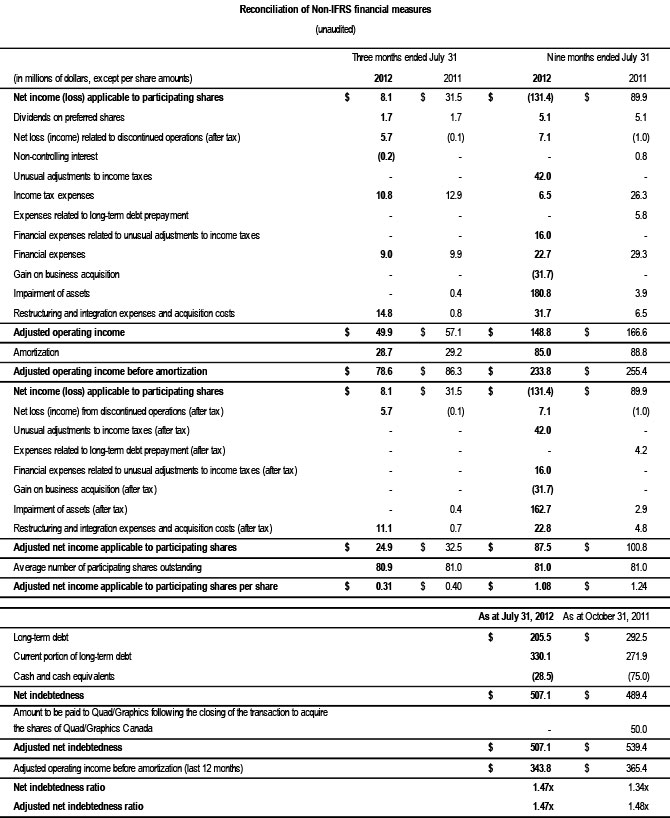 Upon releasing its third quarter results, Transcontinental Inc. will hold a conference call for the financial community today at 4:15 p.m. The dial-in numbers are (514) 807-9895 or (647) 427-7450 or 1-888-231-8191 and the access code is: 86643033. Media may hear the call in listen-only mode or tune in to the simultaneous audio broadcast on the Corporation's Web site, which will then be archived for 30 days. For media requests for information or interviews, please contact Nancy Bouffard, Director, Internal and External Communications of TC Transcontinental, at 514 954-2809.

TC Transcontinental creates marketing products and services that allow businesses to attract, reach and retain their target customers. The Corporation is the largest printer in Canada and the fourth-largest in North America. As the leading publisher of consumer magazines and French-language educational resources, and of community newspapers in Quebec and the Atlantic provinces, it is also one of Canada's major media groups. TC Transcontinental is also the leading door-to-door distributor of advertising material in Canada through its Publisac network in Quebec and Targeo in the rest of Canada. Thanks to a wide digital network of more than 3,500 websites, the Corporation reaches over 18.7 million unique visitors per month in Canada. TC Transcontinental also offers interactive marketing products and services that use new communication platforms supported by marketing strategy and planning services, database analytics, premedia, e-flyers, email marketing, custom communications and mobile solutions.

This press release contains certain forward-looking statements concerning the future performance of the Corporation. Such statements, based on the current expectations of management, inherently involve numerous risks and uncertainties, known and unknown. We caution that all forward-looking information is inherently uncertain and actual results may differ materially from the assumptions, estimates or expectations reflected or contained in the forward-looking information, and that actual future performance will be affected by a number of factors, many of which are beyond the Corporation's control, including, but not limited to, the economic situation, structural changes in its industries, exchange rate, availability of capital, energy costs, increased competition, as well as the Corporation's capacity to engage in strategic transactions and integrate acquisitions into its activities. The risks, uncertainties and other factors that could influence actual results are described in the Management's Discussion and Analysis (MD&A) for the fiscal year ended on October 31st, 2011 and in the Annual Information Form and have been updated in the MD&A for the third  quarter ended July 31st, 2012.

The forward-looking information in this release is based on current expectations and information available as at September 6, 2012. The Corporation's management disclaims any intention or obligation to update or revise any forward-looking statements unless otherwise required by the Securities Authorities.